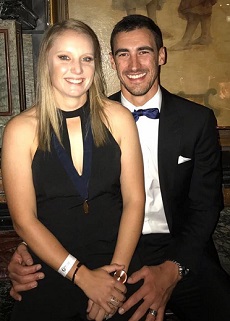 Alyssa Healy has capped off an outstanding season by winning the major Cricket NSW Women’s award – The Belinda Clark Medal. The presentation dinner was before more than 400 guests atthe Hilton Hotel on Saturday night.

Healy’s 479 runs was third overall in WBBL|02, complimenting her nine catches and eight stumpings, five more dismissals than any other wicket-keeper. This ensured Healy was also named the Sydney Sixers WBBL|02 Player of the Tournament.

Alyssa also captained the Sixers to their Maiden WBBL title after Ellyse Perry missed the back end of the tournament due to injury.

In the WNCL she hit her highest score, 159 in just 116 balls against Tasmania, and finished the season with a more controlled 56 not out from 69 balls in the Lendlease Breakers’ comprehensive final victory.

Alyssa is currently having a few weeks break before joining the Southern Stars for their camp in May.