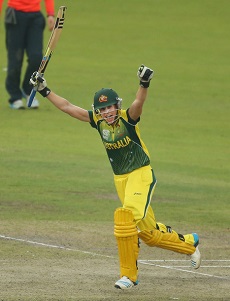 Ellyse Perry and the Commonwealth Bank Southern Stars have won a third successive World T20 title after defeating England in the final at Dhaka, Bangladesh.

After a loss in the first round fixture against New Zealand, the Southern Stars fought back to have wins over South Africa, Ireland, Pakistan, West Indies in the semi-final and finally arch rivals England in the deciding match of the tournament.

Ellyse had a great tournamnent personally and has proved once again that she is one of the best all-rounders in Women’s Cricket. She finished with 106 runs at the impressive average of 53 and 8 wickets at 12.8 runs a piece with the tidy economy rate of just 5.15.

These statistics included a fantastic performance in the final taking 2/13 off 4 overs, a crucial catch and then hitting the winnings runs to finish 31 Not Out from 32 deliveries. Ellyse was named in the team of the tournament alongside Australian Captain Meg Lanning.

Ellyse has also recently been named in a World XI side to take on an MCC England side at Lord’s as part of a Bicentenary match on Monday 19 May.