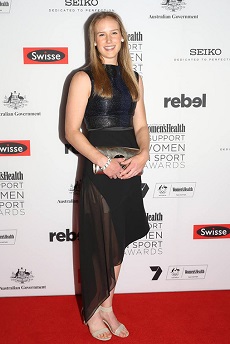 Ellyse Perry has added yet another accolade to her growing list of achievements, receiving the ‘Outstanding Woman in Sport’ award in Sydney on Tuesday night.

Ellyse, who was player of ther series when the Commonwealth Bank Southern Stars regained the Women’s Ashes  from England earlier this year, was recognised for her achievements in both cricket and soccer at the annual ‘I Support Women In Sport’ awards.

She was also nominated for the “Fair Fighter” award, while Southern Stars Meg Lanning earned a nomination for the ‘Leadership Legend’ award.

The Southern Stars – who are the current world champions in both one-day and Twenty20 cricket and are the No.1 ranked team across all formats – were nominated for A-Team of the Year.

“It is great recognition of Ellyse’s dedication and commitment both on and off the field. It is also a credit to how she is always generous with her time encouraging young athletes and girls around the country to grow their skills and realise no dream is too big”.

“Sport Plays a wonderful role in motivating and inspiring people to lead active, healthy lifestyles, and we are proud of Ellyse and her Southen Stars teammates as role models on and off the field.”

The ‘I Support Women In Sport’ awards are run by Women’s Health Magazine and are designed to celebrate the achievements of athletes from grassroots to the elite level.