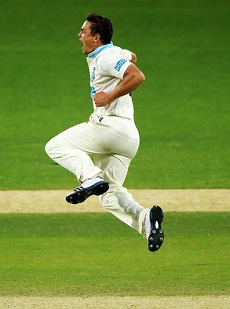 Steve O’Keefe is on absolute fire after capturing career-best figures and claiming Man Of The Match in the Bupa Sheffield Shield Fixture against competition leaders South Australia at Adelaide Oval.

Steve took 5-89 off 36 overs in the first innings and backed it up a superb 6-70 off 27 overs in the second innings. The massive hauls keeps him as the leading wicket taker in the Australian Domestic competition for 2013/14 and takes his season tally to 38 wickets at the incredible average of 20. He also has a career batting average of 27 – the second highest in Australia for a frontline spinner behind Johan Botha.

His achievements are even more astonishing considering he badly injured his shoulder only a month ago and missed the last Shield match.

Steve is statistically the best current spin bowler in Australia, has improved his game signifficantly over the past 12 months and continues to push his case for higher honours with the Australian Test side.

The NSW Blues take on Western Australia next week at Manuka Oval in Canberra, with a win securing them a spot in the Bupa Sheffield Shield Final.