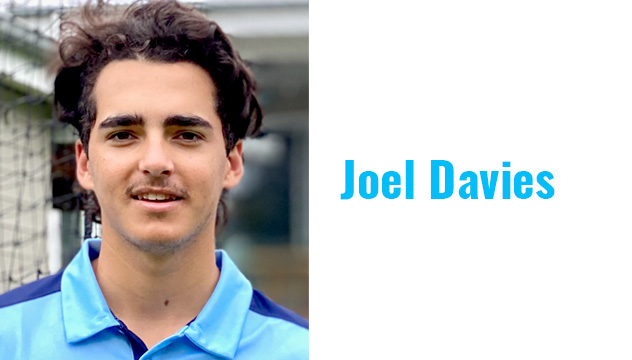 Joel Davies is another young cricketer rapidly progressing through the ranks. He is a left hand bat and left arm orthodox spin bowler. Like his older brother Ollie, he has been a prodigious run scorer in all his junior age competitions and has come through the NSW Pathway system.

In 2018, Joel made his Sydney Premier Cricket debut for Manly Warringah as a 14 year old and scored 101 not out in 5th grade.

In 2019, Joel was captain of the NSW team in Under 15 National Championships where he scored two centuries, including a match winning 103 off 100 balls to lead his team to victory over Queensland in the final. Joel also picked up 1-26 from 10 overs in the final to win Player of the Match

Joel also captained Manly Warringah during the 2019 Under 16 AW Green Shield in Sydney Premier Cricket, finishing the tournament as the leading run-scorer with 501 runs at 62..

In the 2020-21 Sydney Premier Cricket season, Joel was the leading run scorer in 2nd Grade, with 702 runs. He was awarded Player of the Final for his all-round performance after scoring 63 runs and taking 6 wickets.

Joel made his 1st grade debut for Manly Warringah in the 2021-22 season and played several  match winning innings, including 81 not out off 50 balls v Bankstown and 91 v Fairfield. He scored 469 runs @ 34 and took 11 wickets @ 21 - a fantastic return for an 18 year old in his first season in the top grade.

In February, 2022, Joel was rewarded for his performances in Sydney Premier Cricket with selection in the NSW 2nd XI team.

Joel starred for NSW at the 2022 Under 19 National Championships in April, finishing in the top 10 run scorers averaging 81.5 and took 6 wickets @ 15 with his left arm orthodox, to boast the best economy rate in the Tournament of just 2.85 runs per over.