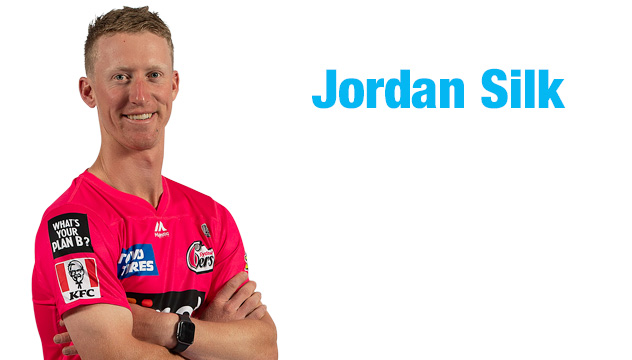 Jordan Silk represents Tasmania after being recruited from his home state of New South Wales.

Jordan started his First Class career with a bang. He scored a total of 347 runs in three matches at an average of 57.83 and a highest score of 127. He scored two centuries and one fifty in his three matches, including a 108 in the Sheffield Shield Final. He also had a blistering start to the Ryobi Cup, scoring 2 half-centuries in his first 3 matches.

Jordan was rewarded for his impressive end to the 2012-13 Sheffield Shield season with a place in the Australia A squad for the 2013 Tour of the British Isles.

Jordan was picked up by the Sydney Sixers in the BBL competition. He was awarded the prestigious Bradman Young Cricketer Of The Year Award at the Allan Border Medal in 2014.

Jordan capped off an amazing BBL with the Sydney Sixers finishing the tournament as the 4th leading run-scorer with 272 runs and the best average of 54.4. This was also the highest aggregate of runs ever scored by a number 5 batsmen in the history of the competition. A brilliant fieldsman, he also took the catch of the Tournament in 2014. The Sixers lost the Final to the Perth Scorchers.

In December 2017, he scored 104 for Tasmania v NSW to record his fifth first class century. He then showed his class to score 76 & 74 in the Sheffield Shield final to take his season average to 41.

Jordan continued his good form in the 2018-19 Shield season, facing more balls than any other player in the competition. He recorded his 6th First Class century v South Australia, following up on his 90 in the previous match v Victoria.

Jordan has had several stints as captain of Tasmania in 2019-20.

Jordan was moved to the middle order of the Tasmanian team for the 2021-22 season and he was the 8th highest run scorer with 514 at the impressive average of 57.11, including his 8th first class century v QLD, plus a captain's match winning innings of 83 not out v WA in November.

Jordan was equally impressive in the Marsh Cup One Day competition, scoring 207 @ and average of 69 to take out Tasmania's One Day Player of the Year Award.

At Cricket Tasmania's Annual Awards night in April, 2022, Jordan was awarded the prestigious Ricky Ponting Medal, in a tie on 134 points with Peter Siddle.

Youngest player in Sydney Grade Cricket History to score a century on debut in First Grade.

Selection in the 2013 Australia A team to tour the UK.

Recipient of the Bradman Young Cricketer Of The Year award presented at the Allan Border Medal 2014.