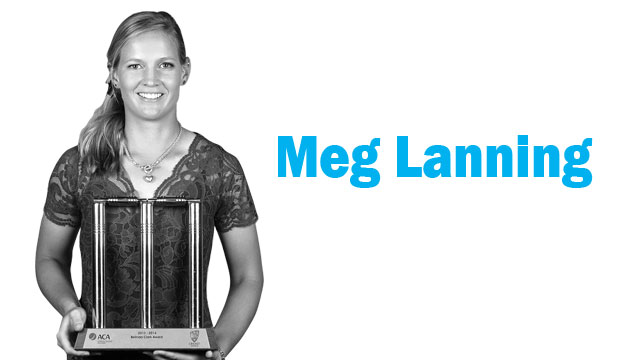 Meg Lanning is captain of the Australian Women's Test, ODI and T20 teams.

Meg boasts quite an incredible domestic and international record.

Meg made her T20 International debut on 30 December 2010 against New Zealand. She then made her One-Day International (ODI) debut on 5 January 2011 against England at the WACA Ground. Two days later, in just her 2nd international game, she scored her maiden ODI century against England, making 103 not out off 148 balls. In doing so, at 18 years and 288 days she became the country's youngest ever centurion and youngest ever Australian cricket captain – male or female. Meg also holds the records for the fastest 50 and fastest 100 in an ODI by an Australian female cricketer, breaking the record in December 2012 scoring a century off just 45 balls.

Meg was #1 ranked batter in the world in the ODI and T-20 formats until she was forced to have surgery on a shoulder injury, that kept her out of the 2017/18 Ashes Series.

Meg captained the Southern Stars to an incredible Ashes Series win in the UK in August 2015 - this is the first time the feat has been achieved since 2001. She repeated the feat in 2019, where Australia dominated the series winning 12-4 on the points system. During the series, she set a world record highest score in a T20I, smashing 133 not out off just 63 balls at Chelmsford.

Meg has led the Commonwealth Bank Southern Stars to three successive ICC World T20 titles and achieved the feat again in November, 2018, defeating England in the World Cup final. Then in March 2020, after carrying the weight of a home nation on her shoulders for 2 years, Meg led the Aussies to yet another brilliant World Cup victory at the MCG, in front of 86,000 spectators.

She has now played 199 matches for Australia and has scored 14 x ODI centuries at an average of over 53, plus 2 x T20I centuries.

Meg Lanning at just 29 years of age, is already one of the greats of the game.

Youngest ever Centurion for Australia, Male or Female (18 years and 288 days)

Holds the records for the fastest 50 and fastest 100 in an ODI by an Australian female cricketer. Breaking the record in December 2012 scoring a century off just 45 balls