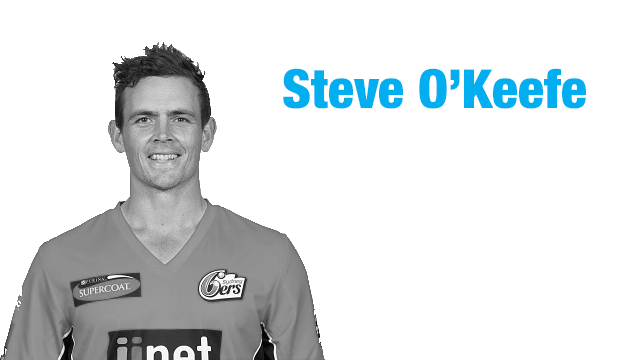 In 2010, he was selected on Australia’s Tour to England v Pakistan. The left arm orthodox spinner starred in his T-20 international debut, taking 3-29.

In 2011, he won the prestigious Steve Waugh Medal, voted by his peers as the Best Player for NSW in that season. In October 2011, Steve was announced as captain of the NSW Blues for the 2011-12 season. He was also an integral part of the Sydney Sixer’s side that won the 2011-12 BBL and Champions League titles.

In 2013-14 he was the leading wicket-taker in the Sheffield Shield with 41 wickets at the impressive average of 20. His consistent performances over many years, finally earned him a baggy green  Test cap. He made his Test debut on 22 October 2014,  Pakistan series in the UAE. after receiving Australian Test player # 439. He was Australia's leading wicket-taker for the match with 4 wickets out of only 11 taken.

SOK was recalled to the Australian Test lineup for the 2016 Sydney Test in which he was the leading wicket-taker with 3/63. He also performed strongly on the Sri Lanka tour in July 2016 where he took 13 wickets in two matches before he injured his hamstring which cut his tour short.

After another strong performance in the Sydney Test in 2017, he earned a place in Australia's Test tour to India.  In February 2017, his 11 years of hard toil finally paid off, when he took an astonishing 12-70 to win man of the match in Australia's upset Test victory over India in Pune. In doing so, SOK recorded the best figures ever by a touring spinner on the sub-continent!

In the 2018-19 BBL, he had an outstanding campaign capturing 19 wickets for the Sydney Sixers. The following season, he was again a member of the victorious Sydney Sixers BBL team.

During the 2019-20 Sheffield Shield season, SOK captured his 300th First Class wicket, at the remarkable average of 24.6 and announced his retirement from First Class cricket at the end of the season.

SOK played 9 Tests for Australia. He will go down as one of the country’s finest spin bowlers having collected 301 First Class scalps at an impressive average of 24.66 runs each - he also scored almost 2,356 First Class runs at an average of 25.60 with the bat.

In 2020-21, he played in the BBL and was an integral member of the Sydney Sixers team winning back to back titles.

Member of the Sydney Sixers squad who won the 2011/12 KFC Big Bash.

Member of the Sydney Sixers squad who won the 2012 Champions Champions League in South Africa.

Leading wicket-taker in the 2013/14 Sheffield Shield with 41 wickets at an average of 20.
Has Represented Australia in Test and T20.

Leading wicket taker out of all spin bowlers in the 2012/13 Sheffield Shield. Steve collected 24 wickets at an impressive average of 22.