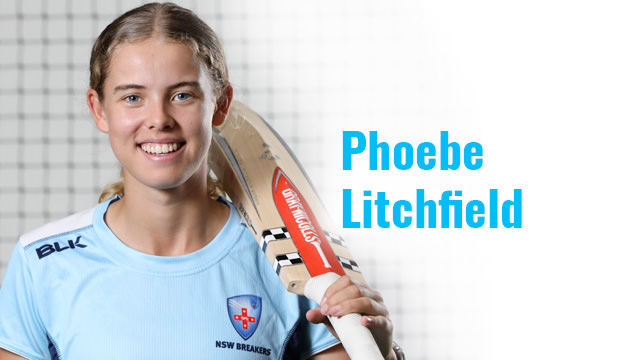 Phoebe is a stylish left-handed batter and at age 18 is regarded as one of the most precocious young batting talents in women's cricket.

Phoebe has already made a mark in the WBBL and WNCL and also had success playing for Australia A.

Phoebe plays for the NSW Breakers in the WNCL and the Sydney Thunder in the WBBL.

She made her WBBL debut on 18 October 2019, aged just 16. In just her second match for the Thunder, she became the youngest player to make a half century in the WBBL.

In WBBL 7, she won the Young Gun award for best player Under 21 years of age, having scored 263 runs in the tournament.

Phoebe was then selected for Australia A and top scored in the first ODI v England A, scoring 54 off 78 balls and did it again in the third ODI hitting 76 off 98.

Phoebe was raised in Orange in NSW. She has now relocated to Sydney to now focus full time on her cricket with the NSW Breakers and Sydney Thunder.

In  her second match for the Thunder, she became the youngest player to score a half century in the WBBL

Selection for Australia A in 2022