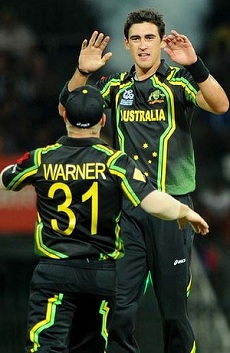 Both Ellyse Perry and Mitchell Starc have had very successful tours of Sri Lanka in their respective ICC T20 World Cups which concluded last week.

Ellyse was included in the ICC T20 Women’s World Cup team of the tournament for her recent success with the Southern Stars. She received player of the match in the semi-final against the West Indies and claimed 1-24 and 2 catches in the final which Australia won by a thrilling 4 runs against arch rivals England.

Ellyse has now arrived back in Australia where there is no signs of slowing down for the talented dual international. She begins training with her new Football club Sydney FC and the NSW Breakers Cricket side.

Mitchell was also included in the ICC T20 Men’s World Cup team of the tournament. The tall left-armer has been in fantastic form for the Aussie’s who were unfortunateky knocked out in the semi-final against the West Indies. Mitchell recorded 9 wickets at 14 runs a piece during the tournament.

He now has headed to South Africa with the Sydney Sixers who are competing in the Champions League T20 tournament.