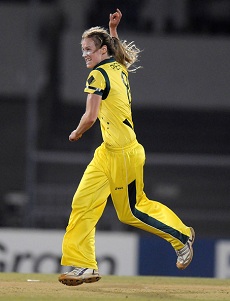 Ellyse Perry and the Southern Stars have produced a fanastic team effort to claim a record 6th ICC Women’s World Cup last night by beating the West Indies in the final which was hosted by India.

Ellyse had missed all of the Southern Stars Super-Six matches in the tournament due to an on going ankle injury that unfortunately kept her off the field. She was deemed fit enough to play in the final against the West Indies and she didn’t dissapoint – smashing 25 N.O off 22 balls to help take the score to a very respectable 259.

After coming on to bowl and failing to get through her first two deliveries due to her ankle problem, Ellyse pushed through the pain barrier and ended up taking 3-19 off 10 overs to secure victory by 114 runs for the Aussies.

“Absolutley thrilled to be part of a squad of such amazing girls and to bring home the Women’s World Cup for a 6th time. I was pleased i got through my overs and was able to make a contribution to the team” Ellyse said

In some other exciting news, Ellyse was named in the Matilda’s training camp by new coach Hesterine de Reus.

Since arriving back in Australia she will see her specialist regarding rehab on her ankle.