First Leg Of IPL 7 In The UAE Completed 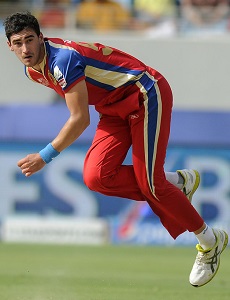 Mitchell Starc and the Royal Challengers Bangalore have completed the first leg of the 2014 IPL in the UAE. This part of the tournament saw each team play 5 games.

RCB started the tournament in strong form winning their first two games convincingly although unfortunately lost their last 3 games due to a lack of execution with their batting. This leaves RCB in equal 4th posistion on 4 points.

Mitchell Starc has been in fine form with the ball in his debut IPL season and is equal 3rd in the wicket-takers list with 7 wickets at an average of 18.7 and economy rate of 6.55.

He has also taken some spectacular catches in the outfield. They can be viewed here.

The next phase of the tournament for RCB commences on Monday the 5th of May at their home ground in Bengaluru against Sunrisers Hyderabad.