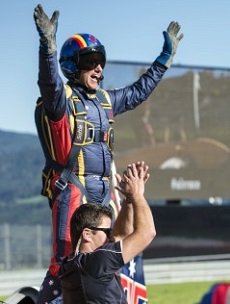 On his 24th attempt, Australian pilot Matt Hall has broken through for a career first victory by taking out the sixth round of the Red Bull Air Race in Spielberg, Austria.

Flying overhead the Red Bull Ring, Hall stormed to the win by just 0.057 from the sport’s biggest name, Brit Paul Bonhomme. American veteran and another former world champion Kirby Chambliss was third. Czech pilot Martin Sonka flew first in the Final 4 and posted a 58.422 before Chambliss jumped into the hot seat with a 58.291. Hall was next and laid down a sizzling personal best for the track of 56.851, holding off Bonhomme’s last chance 56.908.

Incredibly, Bonhomme, who has twice been world champion and won more races than any other pilot’s in the sport’s history, was ahead of the Australian in the first three of four sector times and Hall looked set for a fifth career runner-up finish and third of the season behind Bonhomme.

Hall now moves to 50 points in the world championship standings, five behind Bonhomme and a massive 20 ahead of the third placed Austrian Hannes Arch. Local star Arch was the day’s biggest casualty, hitting the start gate and climbing out of the track in the round of 14, receiving no points for the round.

After landing, Hall climbed out of his cockpit and celebrated wildly, standing on the wing of his plane in front of the massive crowd at the Austrian Formula 1 track. It was obvious the victory meant a lot.

“Finally. I think I just removed that monkey off my back. People can stop asking me those questions about when I’m going to win a race,” a jubilant Hall said with his feet firmly planted on terra firma, but his head definitely still in the clouds.

“We have been working so hard and we knew if we kept working on our consistency the win would come eventually. To do it here in Austria where the race and Red Bull has so much history is just amazing.”

Hall said he was looking forward to the season’s final two rounds and continuing his blossoming rivalry with Bonhomme.

“Paul is always so consistent and so strong but we are in there with a shot now for the end of year,” Hall said.

“The key for us is going to be to make sure we don’t change anything and continue to prepare to race every day the way we have been. As far as we are concerned, the focus is now on the first training run in the next race, then the second training run, and so on, until our final flight of the race. If we take our eyes off that and look towards the championship we will go off the rails.”

Hall, the 43-year-old former RAAF fighter pilot, who is based at Lake Macquarie airport, began the day by dispatching Spain’s Juan Valarde in their man-on-man round of 14 match-up, despite hitting a pylon in the strong winds. He later described it as the toughest run of his career. In the round of 8 he came up against German Matthias Dolderer and came away with an almost three-second victory, although Dolderer’s time included two seconds for a penalty.

Then came the final 4 – Hall’s fifth in the six rounds so far this season – and a wonderful victory.

The series now heads to the USA with the penultimate round at the Texas Motor Speedway in Fort Worth on September 26 and 27, before the season finale in Las Vegas on October 17-18.

Australian viewers can watch the Spielberg race on various replays across the Fox Sports platform on Monday, Tuesday, Wednesday and Thursday.