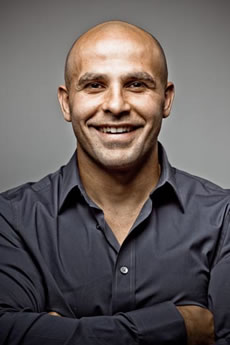 He is the NRL’s highest-ever point scorer, a passionate and tireless community leader, and an inspirational role model  to many – now Rugby League legend Hazem El Masri can add the title ‘doctor’ to his list of many achievements.

The University of Western Sydney awarded Hazem El Masri an honorary doctorate of letters in recognition of his distinguished service to the communities of western Sydney and for being a role model and leader in the Arabic community.

During his playing career and since his retirement from Rugby League, Hazem has dedicated much of his time to community service, travelling to schools across Australia to mentor and build the aspirations of young people, as well as being an ambassador for countless community organisations and charities.

UWS Vice-Chancellor, Professor Janice Reid, says there are few in the community who embody the same values of the University as much as Hazem El Masri.

“Through his actions both on and off the field, Hazem has exhibited a rare, modest dignity that has earned him the respect of all Australians. He has sought to channel his sporting fame and public profile into bringing about positive change, mentoring and inspiring a generation of young people, and working for the betterment of the community.

“One of his most admired qualities has been his willingness to devote his time and energy to helping bring Australians together, promote tolerance, and to improve the understanding between Australians of diverse religious and cultural backgrounds.

“The University of Western Sydney is delighted to confer this award on Hazem El Masri, in recognition of his outstanding service to the communities of Greater Western Sydney and making a significant contribution to Australian public life.”