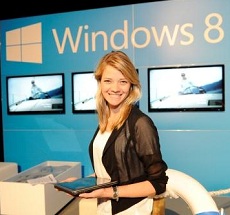 The Australian launch of Microsoft’s Windows 8 was held today in Sydney at the Hordern Pavillion, where Jessica was announced as an ambassador for the brand campaign.

As part of the launch, Jessica had a dedicated precint that feautured a 14 foot Skiff aspart of a nautical theme.

Jessica is feautured in one of the Windows 8 televiision commercials that started airing today. To view the TV, click the link below:

Microsoft and Jessica have shared a partnership over the past 2 years, previously via her involvement with the Imagine Cup campaign. She was delighted to be involved in the Windows 8 campaign.

The most rewarding achievements for me haven’t just been the big projects. Obviously sailing back into Sydney Harbour after 210 days alone at sea, crossing the Sydney to Hobart finish line and writing a number one best-selling book are pretty huge career highlights, but I’m just as proud of the little things I’ve managed to achieve too – like getting my driver’s licence, finishing school and kicking off Uni,” said Jessica.

“It’s a huge juggle but it’s important to me to try and balance it all. The one thing I can’t live without is my Windows 8 Dell XPS 12 Duo – my life literally lives in that calendar and I would be lost without it!”