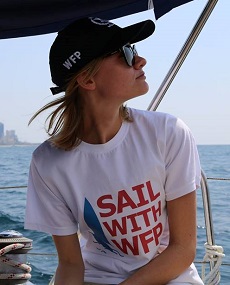 As the United Nations World Food Programme’s (WFP) Youth Ambassador, Jessica has just returned from a visit to Syrian refugees in Lebanon and Jordan where she witnessed their remarkable strength in facing arduous daily challenges resulting from the conflict in Syria.

In Lebanon, Jessica set sail with five Syrian and Lebanese youths from the capital Beirut to a port to the north. Her symbolic “Sail with WFP” initiative aimed to highlight the daunting journeys made by so many young people from their homes in Syria to Lebanon, Jordan and beyond.

“I experienced one of the most incredible trips of my life. Young people in the region are having to bear an unimaginable weight on their shoulders at a time when they should be pursuing their hopes and dreams,” Jessica said.

“I hope that this trip will help raise awareness among my peers back home and abroad about the struggle of the Syrian people.”

In Jordan, Jessica spent a day in Azraq refugee camp with Manal, a single mother from Syria, and her eight children. She listened to their stories, joined the family on a grocery trip to the camp’s only supermarket – where refugees buy food with WFP’s electronic food cards. She learned how to make kabsa, a traditional Syrian rice dish, and visited a Save the Children International youth centre in Amman and met young people from both Syria and Jordan.

Her trip came at a critical time when vulnerable Syrian refugee families are struggling to survive with reduced rations that WFP was forced to introduce early this year due to lack of funding. WFP is funded entirely by contributions from governments, companies and private individuals.

Its regional refugee operation is 81 percent underfunded and needs US$138 million to keep helping desperate refugees in Jordan, Lebanon, Egypt, Turkey and Iraq through September.

WFP is the world’s largest humanitarian agency fighting hunger worldwide, delivering food in emergencies and working with communities to build resilience. In 2013, WFP assisted more than 80 million people in 75 countries.