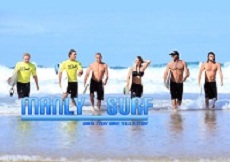 For Australian viewers, the final 4 x episodes of Manly Surf Series 3 will air nationally at 4:30pm on the Nine Network on the following dates:

There’s some great stories within each of these episodes. In episode 5, Matt has more than surfing on his mind when he sends the boys on a once in a lifetime adventure and takes them to an island paradise in Sumatra called the Mentawais.

In episode 6, One of Matt’s closest friends, 2 x world surfing champ
Tom Carroll, is one of the most loved surfing icons in the world, but few know Tom has battled depression.
Hear how Tom dealt with one of the world’s biggest illnesses.

In episode 7, The Legacy Club supports all children who have lost their family members to war. The Club’s ambassador, Victorian Cross winning hero Corporal Ben Roberts-Smith, brings down some very special kids for a
surfing treat.

In episode 8, For the end of summer party Matt brings down the legendary hypnotist Martin St James, where the team have some end of season fun and learn about his amazing talent.

We hope you enjoy the show!