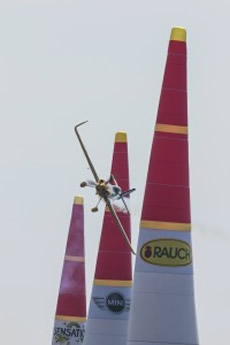 Australian top gun Matt Hall has grabbed a share of the world championship lead after a stunning third place in the third round of the Red Bull Air Race in Rovinj, Croatia.

Hall came through a roller-coaster day with his third consecutive podium finish to move to 25 points and a place atop the overall standings with two-time world champion Paul Bonhomme of Britain.

It was the first time in his four-year Red Bull Air Race career that Hall has had three consecutive podium results or sat at the top of the series ladder.

The result was a far cry from how the day had begun for the Australian who had qualified in third place and been a standout performer in the event’s training sessions. Hall (54.818) started the day by losing to Britain’s reigning world champion Nigel Lamb (54.702) in their round of 14 heat by a mere 0.116. After a nervous wait the former RAAF Wing Commander progressed through to the round of 8 by virtue of being the ‘lucky loser’ – the fastest of the seven pilots defeated in their heat.

Hall’s crack at the top 8 placings was justified as he had the fourth quickest time of the round but as the ‘lucky loser’ he had the misfortune of coming up against Bonhomme in the head-to-head elimination quarter-final. With his race on the line the 43-year-old from Merewether in NSW laid down the flight of his life to clock 53.166 for the fastest time of the day, forcing Bonhomme to fly to his absolute limits. Two thirds of the way through his run the Brit looked to have Hall on the brink of elimination for the second time in two hours, only to bust through the race’s 10G limit, causing an instant Did Not Finish ruling.

Hall then entered the final four as a hot favourite but Arch and Sonka were too good, the Australian again falling just short of a maiden Red Bull Air Race victory. “That close again, huh,” Hall said.

“Coming to work this morning I was confident I could make the podium if I had a little bit of luck on my side. It didn’t start the way I had hoped, having to scratch through the round of 14 as the fastest loser but I was really proud of myself in the round of 8.”

“Once again I think any of us could have won today and I’ve just been pipped again by mere tenths of seconds. It’s good to be gathering points and it’s good for a third podium but geez I keep pushing for that win.”

Hall paid tribute to his team and said they remained focussed on the overall goal of a top finish in the end of season world championship standings.

“We’ve had a few things not go our way in the last three races, just things that happen from time to time to all teams but my team has always managed to bounce back and be really strong and positive on race day,” Hall said.

“I’m really proud of the team. We’ve got a great aircraft, DG Gliders have done a good job with the winglets, the team is putting the plane together well and making sure I’m in the right spot all the time. If we just keep doing what we are doing, after three podiums in a row, keep that sort of form going we’re going to be right up there at the end of the year.”

The next round of the Red Bull Air Race World Championships will take place in Budapest on the first weekend in July before further stops in Ascot (UK), Spielberg, Dallas/Fort Worth and Las Vegas.