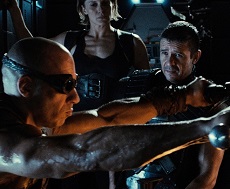 “Vin is just overwhelmingly passionate about the story and the characters. He is an incredibly gentle guy with a gentle soul, it has been great. Jordi Moller was also extraordinary to act against, acting against him was a little intimidating but he certainly brought out the best in me that’s for sure” Matt said.

The film is the third in the franchise after “Pitch Black” (2000) and “The Chronicles of Riddick” (2004). The film has already grossed over $74M world wide and is set to be Matt’s biggest success at the box office as an actor thus far.

The trailer for “Riddick” can be viewed here.