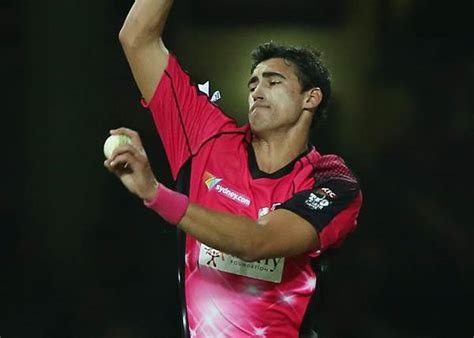 Australian fast bowler Mitchell Starc is set to feature in the Big Bash for the first time since BBL 04, signing with the Sydney Sixers for the upcoming season.

Mitch was part of the inaugural Sixers squad that won the first-ever BBL trophy in the 2011-12 season, along with helping the side win the 2012 Champions League, where he was named player of the tournament.
Test match commitments have limited the availability of the left-arm quick since, having played just 10 matches for the club between 2011-2015.

However, Mitch is expected to be available for the final two games of the regular season and the finals, with the series against India set to end on January 19.
With his wife and Australian women’s keeper Alyssa Healy starring for the club in the WBBL, the 30-year-old was looking forward to continuing his journey in magenta.
“It’s great to be back in magenta after five seasons away from the Big Bash,” said Mitch.

“I started at the Sixers at BBL01 and it’s nice to continue that journey at a club I’ve still been around with my wife Alyssa involved with the Sixers.”
“I’ve been watching from afar, the Big Bash, so it’s nice to be back involved this year and seeing the guys run around it’s a great product,” he said.

“It’s a great time of the year for cricket in Australia and the Big Bash just shows that level of cricket and I guess that excitement that everyone wants to watch.”

“I was watching Steve and Josh get back involved last year, and still being around and involved with the club I saw a little bit of an opportunity to jump back in and hopefully help the boys go back to back.”

“I’m just really looking forward to being back with some of my really close mates that play for NSW and the Sixers.”

Sixers coach Greg Shipperd was pleased to secure his signature for the upcoming season.
Shipperd said.

“Mitch is a maximum impact player who is a world class T20 fast bowler as well as being in the upper echelons across the other formats,” said Shipperd.

“Mitch and Alyssa really are part of the fabric of our franchise. I’m sure all of our fans look forward to the day Mitch reappears for the Sixers. We can’t wait.”