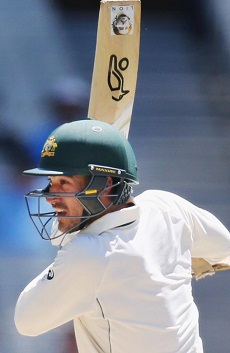 Australian fast bowler Mitchell Starc cracked a superb 91-ball 84 against Pakistan on Friday at the Melbourne Cricket Ground to help his side pull off a remarkable victory on the final day of the Test Match.

And other than pleasing Australian cricket fans across the country with each run he was out in the middle for, there was one man, in particular, he was pleasing: Andrew Fraser, Starc’s agent. Starc batted like a millionaire and swung with the fury of a lion on Friday in his record-breaking knock, in more ways than one.

In the lead-up to the Test series against Pakistan, Fraser asked Starc if he’d be willing to promote the new movie LION, which he’s an Executive Producer of, by wearing a sticker on the back of his bat for the Boxing Day Test, to which Starc agreed. The sticker was the movie poster with a picture of star Dev Patel with the word “LION” emblazoned on the back of Starc’s blade.

“I was just hoping that he would have a big innings where it could get some good coverage and he pulled off a remarkable, record breaking knock – it was just brilliant. I owe him a few beers now!,” Fraser said.

The Australian quick hit his second highest ever Test score and in the process broke the record for the most sixes hit in an innings at the MCG and the sticker was exposed to millions of viewers both in Australia and around the world.

LION is released in Australia on January 19.