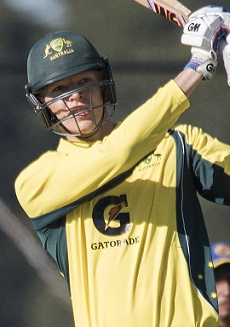 17 year old young gun Jack Edwards has recently joined the team at Sunstar. The talented 195cm all-rounder hails from the Northern Beaches of Sydney and plays for Manly Warringah in the Premier Cricket competition alongside older brother and NSW Blues Rookie Mickey and Test bowler Steve O’Keefe –  both of whom are also on the Sunstar team.

Those who have seen Jack bat in the Pathways system over the past 12 months have seen him dominate bowling attacks before; firstly at the top of the order for NSW Metro at the Under-17 championships and then for the Cricket Australia XI in the Under-19s.

Jack was also one of the shining lights in the Australia U’19s team in their recently completed 6 match series against Sri Lanka. He scored a debut century for Australia against Sri Lanka at just 16 years of age.  Whilst he was the youngest member of the squad, he had one of the biggest impacts on the series – scoring 273 runs at 54.6 including the century in the 3 day fixture. He went on to be named joint player of the series alongside fellow NSW squad member Param Uppal.

“I wasn’t really expecting too much at all coming into the series, I just wanted to have fun,” Jack said after the series

“The enjoyment that I took into it helped me perform as well as I did, so I’ll definitely keep using that in the future. If I just keep having fun, I know that the performances will come.”

Jack is now back to school, studying hard in Year 12, with the HSC being his current focus.