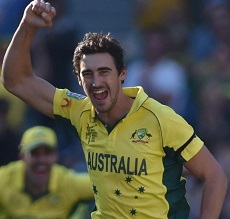 Mitchell Starc has been named in Australia’ 15-man squad for the Champions Trophy which begins in June over in the UK.

Mitchell is currently on the sidelines after injuring his foot in the recently completed tour of India although is expected to be fit in time for Australia’s opening fixture on June 2.

The quadrennial eight-team event will be played in the UK between June 1 and 18, where Australia will be grouped with hosts England as well as Bangladesh and New Zealand in Group A, while defending champions India are pooled with South Africa, Pakistan and Sri Lanka in Group B.

The members of the squad not currently in the Indian Premier League or English County Cricket – Hazlewood, Starc and Wade – will depart for England on May 18, while those in the IPL will stay with their respective franchises.

The full squad for the tournament is: