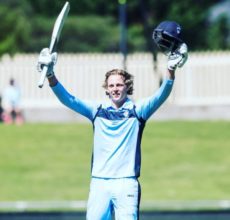 NSW Metro have claimed the 2017-18 CA Under 19 National Championships title, cruising to a 120-run victory over the Cricket Australia XI at Blundstone Arena on Friday.

Sydney Sixers rookie Jack Edwards led the way with a Player Of The Match powerhouse performance – posting a superb century before eventually being dismissed for a 125-ball 147.

The century included fourteen boundaries and three 6’s in a display of brute force and technical finesse.

Jack helped propel the total for NSW Metro to 6-296 and they were able to dismiss the CA XI for 176. He claimed the figures of 1-26 after dismissing opener Kyle Brazell.

It was a great day for Jack as his name was also announced in the Australian U19 World Cup squad in the morning before the Final commenced on Friday. The 15-player squad are set to compete for the 2018 ICC Under 19 Cricket World Cup in New Zealand.

“It was an amazing day all round and a really great team effort to win another title for NSW” said Jack.

Australia have been drawn in Pool B for the tournament and will begin their World Cup campaign against India on January 14 at Tauranga’s Bay Oval, before matches against Zimbabwe (Jan 17) and Papua New Guinea (Jan 19) in Christchurch.

Jack is now back in Sydney where he will be joining the Sydney Sixers as their BBL Rookie for the tournament this Summer.