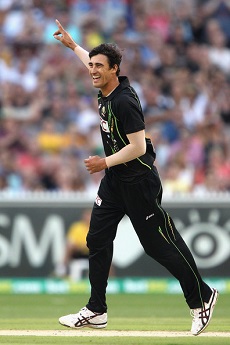 Mitchell Starc has been bought by the Royal Challengers Bangalore for IPL 7 at day 1 of the player auctions being held at the ITC Gardenia, Bengaluru.

Mitchell was the 8th highest earner at the auction, pulling in an impressive 5,00,00,000 INR ($889,000 AUD) for his services this year. With his ability to bowl near 150 kph, swing the bowl both ways and extract sharp bounce, Mitchell is one of the most destructive limited-overs bowlers in World Cricket. This is evident by him taking the most wickets in the 2012 T20 Champions League held in South Africa, being leading wicket taker in the T20 English Domestic Competition in 2012 and more recently being named in the ICC ODI World Team Of The Year for 2013 and the Australian T20 World Cup squad which is beginning their campaign next month in Bangladesh.

Mitchell joins some of the superstars of International Cricket when he joins the Challengers with the likes of Chris Gayle, Virat Kohli, AB De Villiers, Yuvraj Singh and Muttiah Murilitharan all apart of the star-studded squad for 2014. The coaching staff include NZ Great Daniel Vettori,  South African Fast Bowling Legend Allan Donald and highly respected batting and fielding coach Trent Woodhill.

The tournament begins April 8th with the final match being played on the 30th of May.