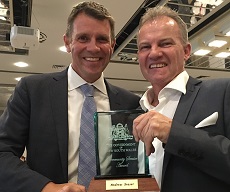 “Andrew has made an exceptional contribution to both the cricket club and the wider Manly community. In his role as Honorary President of Manly Cricket Club over the past 13 years, Andrew has helped shape hundreds of young cricket players to be responsible, community minded young men,” said Premier Baird.

“Outside of the cricket club, Andrew set up and oversaw the ‘All in for Alex’ fundraising campaign that raised over $1 million in just eight weeks, for his terminally ill niece Alex Piper, her blind husband Matt and their three young children. It is the most successful crowd-funding campaign for a charitable cause in Australian history.”

“I could not think of a more deserving recipient of this prestigious award.”