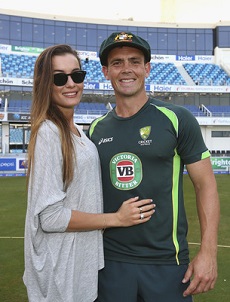 Steve O’Keefe has just completed his first Test Match for Australia. Although not the result Steve and the Aussies were after, it was a dream come true for the left-arm tweaker who has been plying his trade with the NSW Blues for the past 9 seasons.

After a strong performance in Australia’s warm-up match against Pakistan A where he took 3-76 in the first innings, Steve was called up to play alongside Nathan Lyon for the first match of the two Test series against Pakistan at Dubai International Cricket Stadium.

When Dean Jones presented Steve with baggy green number 439, his mother Jann noticed the irony in the ceremony.

“Steve’s first bat we found in the shed and it was a Dean Jones Supreme bat,” Ms O’Keefe says. “He mucked around in the backyard with it. He also had a navy blue Victorian shirt as well with Jones’ name on it.

“I didn’t know much about cricket but I knew he loved Dean Jones.”

Steve managed to gain invaluable experience from his first Test, bowling on a flat pitch to two of Pakistan’s greatest ever players in Younis Khan and Misbah-ul-Haq in the scorching Arabian Sun. He ended the match as Australia’s leading wicket-taker with 4 wickets out of the 11 taken.

The Australians were outplayed in all facets of the game by the Pakistanis and deservedly won the game on the final session of day 5.