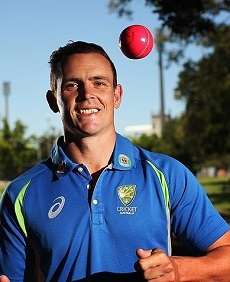 Steve was called into the starting side for the Australian Test Team for their third and final Test against the West Indies at the SCG.

The decision came as Australia have decided to play two spinners for the first time on home soil in ten years – the last time was in 2006 against when Shane Warne and Stuart MacGill lined up alongside each other.

When asked of his views playing alongside another spinner at the SCG, Steve said “I enjoy playing with Nathan, he is a humble, lovely guy who I admire a lot and I’m excited for having the opportunity. The year we won the Shield we had some good performances and to play two Spinners in a Shield Final is a pretty cool thing to happen I guess. There are a couple of situations we have bowled the majority of the overs and enjoyed going each side of the bat.”

Due to the heavy rain in Sydney all week the match unfortunately ended in a draw with Australia finishing the series with a 2-1 victory. Steve was the stand out performer for Australia in the field – taking 3/63 to be Australia’s highest wicket-taker and most economic bowler for the match.

Steve’s next goal is to make the Test squad for upcoming tour to Sri Lanka in July which includes 3 Test matches.