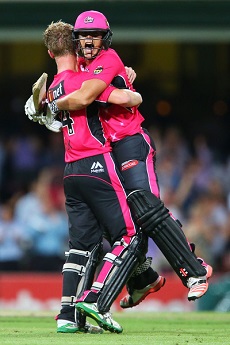 Mitchell Starc has been in some great form with the Australian side this past month, with back to back Man Of The Match awards against England and India which included his career-best haul of 6-43 against India. In four ODI matches thus far in the Trianagular Series, he has taken 12 wickets at the amazing average of 13. Mitchell was also named in the Australian ODI team for the upcoming ICC Cricket World Cup which will be taking place in Australia and New Zealand commencing on the 14th of February.

Ellyse Perry has been once again starring for the NSW Breakers in the WNCL and WT20 competitions with dominant performances accross the whole Summer in all formats. Recently in the WNCL Semi-Final, Ellyse received Player Of The Match for for scoring 61 and taking 1-31 off 10 overs. She then scored 57* and took 2-19 off 10 overs in the WNCL Final to help the Breakers reach their 10th consecutive title. Yesterday in the WT20 Final in Canberra, she scored 13* and had figures  of 0-9 off 4 overs to seal a dominant victory over Melbourne.

Jordan Silk has been arguably the most improved performer of BBL|04 with strong performances for the Sydney Sixers over the course of the campaign. He finished the tournament as the 4th leading run-scorer with 272 runs at the average of 54 and a Strike Rate of 137. This included 2 half centuries, and a match winning innings of 69 Not-Out off 43 balls against the Sydney Thunder, with Steve O’Keefe hitting consecutive boundaries off the last two balls to seal a nail-biting win for the Men in Magenta at the SCG.

The Sixers then faced first placed Adelaide Strikers in the Semi-Final, with the Sixers making a franchise high-score of 181. They then followed this up with a clincal display with the ball to bowl the Strikers out for 94 inside 15 overs with Steve O’Keefe taking 2-17.

Next stop Manuka Oval in Canberra VS the Perth Scorchers for the BBL|04 Final. After being restricted to 4-49 early, Henriques and Carters steadied the ship to post a very competitive total of 4-147 on a slow wicket. The Scorchers ended up sealing the victory on the very last ball of the innings in what was a great game of Cricket.

Jordan Silk was rewarded with a new 3 year deal at the Sixers for his strong performances accross the season. Watch his incredible catch against the Thunder here.