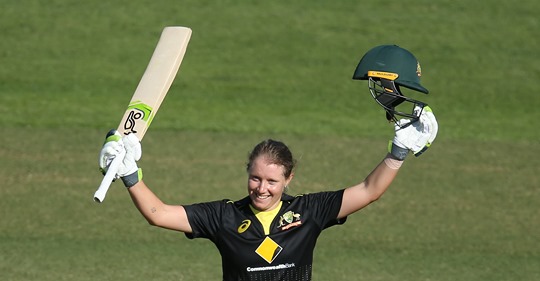 Alyssa Healy was named the ICC Women’s T20I Player of the Year for 2019 after an amazing season, providing some jaw-dropping numbers that defined the Australian wicket-keeper batter’s year.

Carrying her terrific form from 2018, Alyssa once again set the stage alight in 2019, creating a few records in the process. Here’s a list some of them;

Highest score in women’s T20I cricket – 148* off 61 balls
Alyssa had been in good form throughout when Sri Lanka toured Australia for three T20Is, having scored a rapid 43 in the first game and 21 in the second, but it was in the third that everything clicked for her. There was no looking back from there as she ruthlessly attacked every bowler, clearing the fence at the North Sydney Oval almost at will. That knock powered Australia to 226/2, and they won by 132 runs.

Strike-rate of 173.02
Among batters who have scored at least 300 runs in a calendar year, no one has ever struck them at a faster rate in women’s T20Is. Even the previous record was held by Alyssa herself, but that strike-rate of 145.95, at which she accumulated her 578 runs in 2018, was well overshadowed by her manic hitting this year.

Wicket Keeping – 75 career dismissals
While her 148* was the record that hogged all the limelight, Alyssa also achieved a wicket-keeping milestone. Her catch to dismiss Harshitha Madavi off Nicola Carey v Sri Lanka took her past England’s Sarah Taylor’s record tally of 74 dismissals in women’s T20Is. With Taylor having retired in 2019, Alyssa has a chance to build on that lead.

Average of 53.14
What makes Alyssa’s exploits this year so commendable is that despite that ground-breaking rate of scoring, she kept that level of performance up for remarkably long periods, as her average of over fifty shows. She finished the year with an average of 53.14

World’s best WT20I opener – 1181 runs at a strike-rate of 137.16
Since the start of 2014, when Alyssa was first promoted to the top of the order, only three batters – Suzie Bates, Mithali Raj and Smriti Mandhana – have scored more than her from opening positions. But T20 cricket is as much about strike-rate as it is about run-scoring and none of those players have struck at even 120, with Alyssa being the comfortable leader in that department.