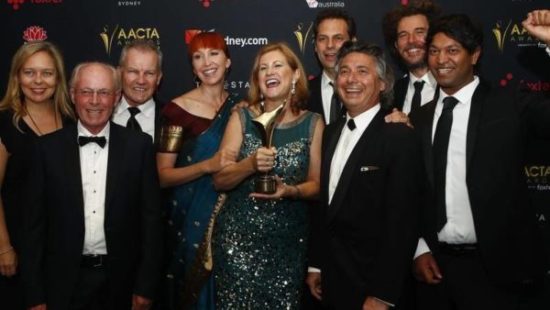 It was a clean sweep for LION at this year’s Australian Academy of Cinema and Television Arts (AACTA) Awards, winning every single one of the 12 gongs it was nominated for, including best film, best direction and both best supporting actor awards for Nicole Kidman and Dev Patel after winning seven out of 7 nominations at the Industry Luncheon two days earlier.

Sunny Pawar’s win for best actor was the one that delighted its director Garth Davis.

“I was just praying that he would win. I could just feel it when I met him that he had something special. There was an instinctual connection with that boy,” said Davis.

It has been an epic journey for everyone involved in the production.

Sunstar Entertainment, who co-produced the film with See-Saw Films and Aquarius Films, optioned the rights to Saroo Brierley’s story in 2012, just weeks after he had found his birth mother in Khandwa, India. Sunstar’s Andrew Fraser and Shahen Mekertichian, executive producers on LION, then set about packaging the film with the right partners.

Saroo Brierley’s adopted mother Sue Brierley, said it all began on the docks of Hobart over five years ago.

“This journey for us began during a sailing race called the Three Peaks in Hobart, in 2012, when we were introduced to Andrew Fraser via Jessica Watson, who was on the boat we were sponsoring. Andrew told us he was going to turn Saroo’s amazing story into a movie,” said Sue.

“Andrew, along with his business partner Shahen, have been with us right from the start and we are so grateful for their vision and support and ensuring this remained an Australian story. We will be friends for life now.”

LION is now one of the most successful Australian films ever with a multitude of international awards and collected AUD$200m at the global box office.

While Fraser and Mekertichian were humbled by Sue Brierley’s comments, they acknowledge how instrumental the Brierleys have been in the success of LION.

“It was a huge commitment for Saroo and the Brierley family to share their story with the world. It has been an incredibly emotional journey for them all, so it was very rewarding for us to see the smiles on their faces when we scooped the awards last night,” said Fraser and Mekertichian.

“While Garth Davis’ favourite winner last night was Sunny, we all know none of it would have been possible without the creative genius of Garth. He was a deserved recipient of best direction, film.”

Congratulations to all the team on LION. The 12 AACTA wins were;